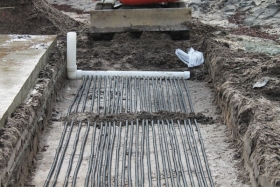 Our SAM (Solar Air Module) systems can do far more than keep you warm during winter. They can also be used in conjunction with other systems to keep your house cool during the summer months. This set-up is called an in-ground cooling system

The SAM In-Ground Cooling System (IGC) ventilates your home or office with fresh, pre-cooled air. The principle is simple: fresh ambient air is pulled in through pipes buried in the ground by a solar-powered fan (normally, but not always, integrated with the controller for our solar air heater) to supply cool air for a healthy and comfortable indoor climate.

The extra fan draws air collected from the SAM modules and channels it through the in-ground tubes, cooling it in the process. This air can then be used to keep your home or office cool.

This system uses the cooling effect of the lower ground temperature to help reduce the temperature indoors. This enables you to cool your house or office by drawing fresh cooled air in through a series of pipes buried 0.4 – 0.6 metres underground.

Ideally, the air intake should be from a cool, shaded area outside, with the pipes installed in slightly damp ground e.g. where a garden is watered. This is because the evaporation of moisture increases the efficiency of the cooling system.

The IGC system has proved to be very effective in Australian conditions, not only in helping you keep cool, but also in ensuring good ventilation throughout summer. Our system is an effective cooling solution, that operates on zero running costs or carbon emissions.

Based on customer feedback from earlier installations, we have concluded that on a 35-degree day, the average system can supply air of about 21 degrees into your home, at an estimated airflow of 60-100 cbm/h. 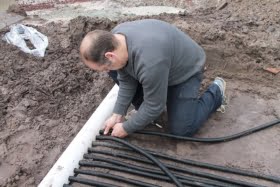 If the airflow is increased, the temperature drop will be reduced, however, as long as the air temperature provided from the in-ground pipes is lower than the temperature in the room it will still have a cooling effect. Generally, on a warmer day higher airflow will be more effective because of the increased ventilation and air movement. For optimum performance, it might be necessary to regulate the airflow depending on the outside ambient temperature.

The IGC is normally installed to introduce fresh air from the outside into the house to improve air quality and ventilate the home or office. It is possible to set the IGC up to recycle the air from the house, which on warm days will increase the cooling effect, but you will miss out on the benefits of introducing fresh air!

Even though our system supplies your house or office will cool air and it certainly has a cooling effect, it can not be defined as a solar air conditioner. In-ground cooling is a sustainable and natural ventilation alternative that can be used on its own but is most often used in conjunction with an existing air-conditioning system.

The system costs nothing to operate and increases the efficiency of your A/C, saving you on your energy costs. Often it’s possible to run the IGC system and keep temperatures in one room at an acceptable level without having to spend money on air conditioning.